If the car you are hauling has pit stops along the way, or needs to be split between two drivers, we have a feature for that.

Written by Mac Van Leuvan
Updated over a week ago

Car hauling often requires "terminal" parking for cars that can't make the journey from Point A to Point B with the exact driver. A Terminal is where you leave a car at a "Drop Off" location for another driver to pick up for the next leg of the journey. We have added a "terminal" feature for dispatchers to keep track of terminal cars and split loads easier.

Our new feature allows you to:

In the "Settings" page of your profile which can be found by clicking your business name, you will be able to find the "Terminals" tab between General Settings and Driver App.

This is where you will add and save a terminal name and location to add to loads in the future.

This is also where you find and delete Terminals you have already added.

Once you have found the Terminals tab, you can click "Add Terminal" to create a terminal and add the necessary information. The information in this section will appear to your driver, so he or she knows where to drop the vehicle load. This screen has the Terminal name, location, and contact person. 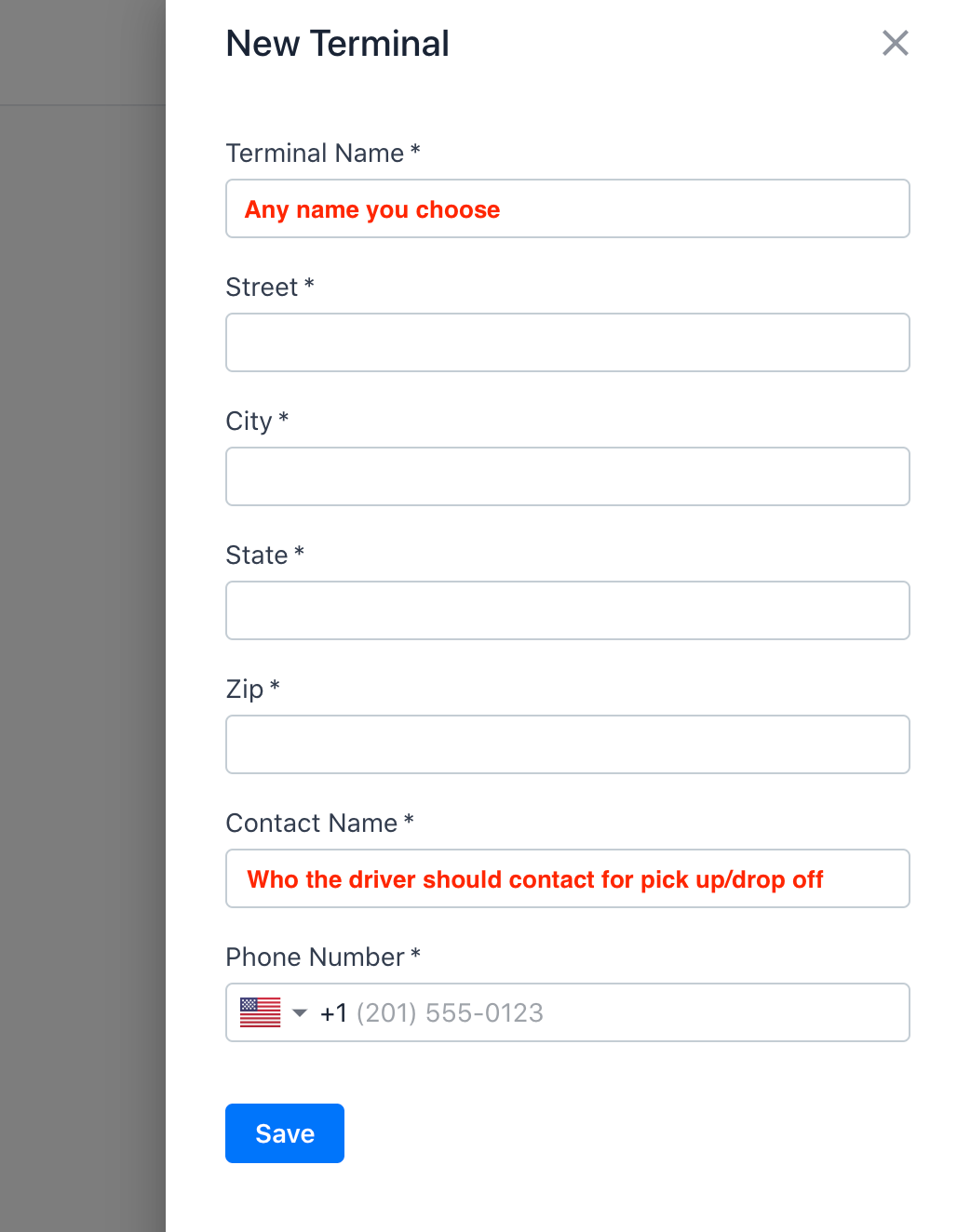 Add Terminal Drop-Offs to a Load

When you have created an order and created your terminals, you can add terminal stops along the route of a load by clicking OPTIONS --> ADD TERMINAL.

Then there will be a new window with terminals you created that you can choose from and add to the load. You can add as many terminals as you need.

Once they've been added, the terminal drop-off will show up as a mid-way point on the load preview:

Removing Terminal Drop-Offs for a load

Once you have added a terminal to a load, you can remove it in OPTIONS in the same way you added it:

You can not remove a terminal if the car has already been delivered.
You must carefully add the correct terminals to a load and mark them as delivered.

View where all your terminal cars are:

When your load is currently in a terminal, it will show up in the new "In Terminal" tab next to "New Load:"

You can also see any information about the terminals of a load if you click on "Load ID" and scroll until you see "Activity:" 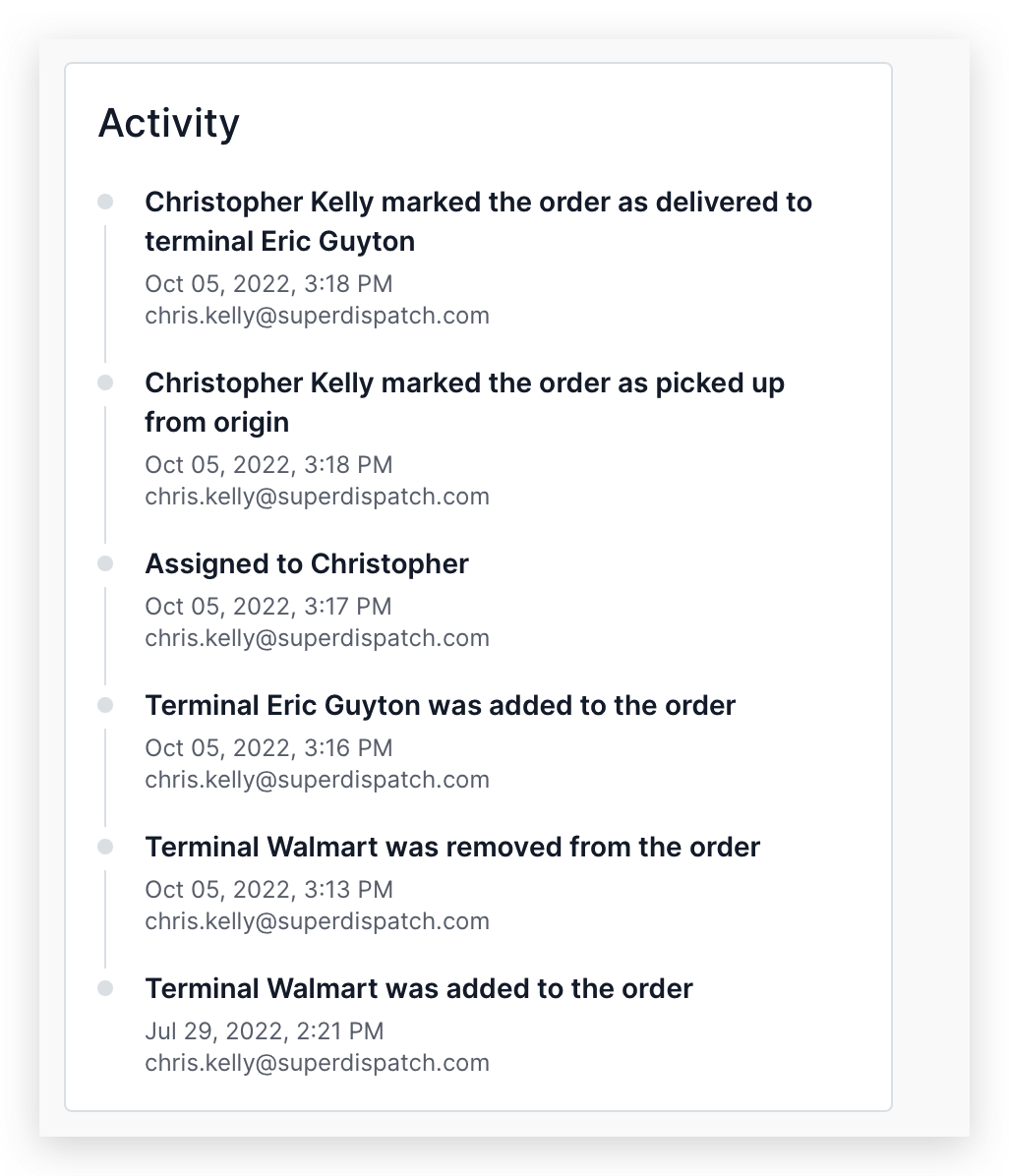 If you want to search by each Terminal (to see how many cars you have in each), you can do that by pressing the "all terminals" button in the search bar of your dashboard and sort by a specific terminal:

What does the driver need to know?

If a driver is doing the first leg of the load, he will not notice anything different. He will only see the FIRST LEG of the trip. The dispatcher's first terminal will look like the driver's drop-off location.

When he finishes his inspection and moves to officially drop it off, there will be a difference. The driver's phone screen is going to look like this: 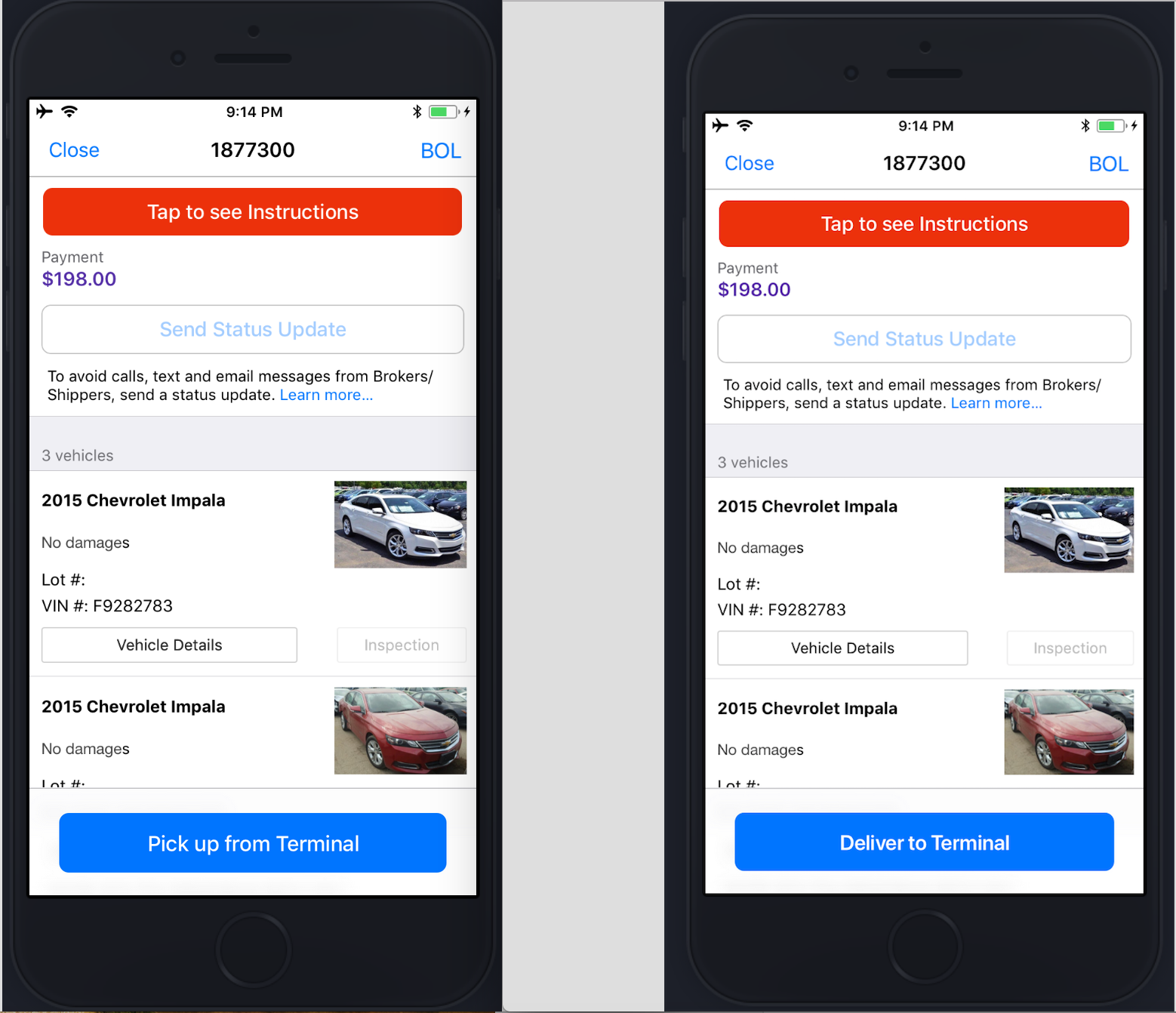 There will be no customer signature because there will probably not be a customer available at the Terminal Drop-Off location.

How do inspections work in terminals?

Watch this helpful walk-through video for Terminals if you have more questions:

Did this answer your question?